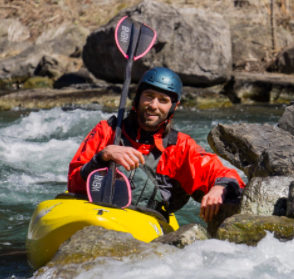 Chris grew up in Montreal, Irish-blooded and English-speaking. He later drifted to southwestern Ontario for an undergrad in Kinesiology at Western, an experience which, to this day, he remembers almost nothing about. Unsurprisingly, his lacklustre academic performance left him rejected from his first adult job application: collecting parking-lot shopping carts. His downward trajectory took him straight to rock bottom when he narrowly escaped jail time for getting busted eating chocolate almonds while shopping at the same supermarket.

Not discouraged by these devastating failures, Chris felt the best way to develop employability was to grow dreads and kayak. Paddling from continent to continent (seriously though, every continent) he grew into the hardy, stoic, and very lovable guy he is today. Between driving a second hand ambulance down to Guatemala, to founding a rafting company in Iceland (now ranked in the top 10% of TripAdvisor’s attractions worldwide), Chris’ energy resonated with the outdoor pursuits of the west coast where he had stints as a BC wildfire fighter and ski patroller, all while delivering pizzas out of the same van he lived in.

Because his life was clearly too boring, Chris returned to the motherland for med school where he could be seen biking up the “mountain” towards McGill’s McMed tower regardless of the -40 temperatures, ski goggles on and icicles growing from his beard and brows. If you had to build an emerg resident in a lab – you would get Chris. Because the universe couldn’t keep him from BC, he now lives in North Van, with trailheads and the Seymour River in his backyard – and yes, he still bikes to the RCH.