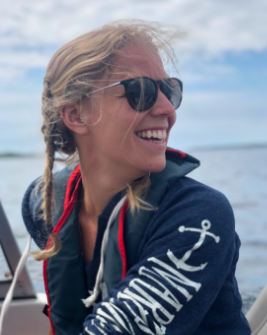 Hailing from the end of a loooong dirt road in rural Ontario, Emily spent her youth galloping through open meadows on horseback and sailing off into glowing eastern sunsets. She expanded her horizons by winter, hockey stick in hand, rocking her opponents into the boards on just about every rink in the province and earning a well-deserved reputation as an all-around crusher. It wasn’t long before she outgrew small town life, taking her game to Montreal where she became the friendly face of the world’s most famous smoked meat joint (while earning degrees in History and Cell biology from McGill on the side… because, why not?!).

Armed with all the wisdom of an accomplished academic and athletic life, and a mystical white streak in her hair to prove it, she pointed her sailboat west and never looked back, knocking down a Masters’ on her way into UBC Medical School. Accidentally drawn to Emergency Medicine through her affinity for Pediatrics, it can only be destiny that she ended up with Seb and Chris as co-residents, who provide her with a constant dose of silly childish challenges. When she isn’t too busy cleaning up after them, she can be found on triathlon podiums, on the couch buried in some 70’s sci-fi, or hosting rockin’ patio parties for her friends and colleagues.