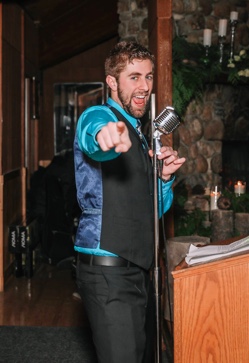 Drafted first round into the Vancouver Island Spikeball League, Sam is another born and bred Island boy, if you couldn’t tell from his luscious facial hair and permanent tan. Sam has five, yes FIVE sisters. Somehow, he survived his early years of having his hair done in braids and moving between urban Victoria and a tiny farm in Prince Albert.

Trying to live out his dream of being a professional ping pong player, Sam started his degree at UVic in Biology but soon decided to head out (read: instigated too many rowdy pong tournaments) and complete his paramedic diploma (read: continued to dominate said tournaments). He then left the Island to work as a primary care paramedic in the bustling and charming metropolis of….. Surrey.

After receiving a work injury in a rather tender area (don’t ask, its still a literal sore point), Sam decided that riding backwards in a speeding vehicle wasn’t all it was cracked up to be and left the mainland to do med school at UBC as part of the Island Medical Program. His philosophy for staying to do residency in Victoria: if it ain’t broke don’t fix it!

Always up to MC an event, or tell you the same joke over and over, his favourite being, “that was my nickname in high school”, he’s a good man for a laugh or the fastest IV start you’ve ever seen. Affectionately part of the Sham-Wow duo, Sean, I mean Sam, I mean…. wait. Thankfully we’ve trained him to answer to pretty much anything, including Dr. Bro. Yes, he came up with that name himself and no it has not caught on.

If he’s not in the Emergency Department throwing in tubes and lines, you can find him playing a variety of instruments, sipping a fine tumbler of whiskey or working on his Spikeball game.