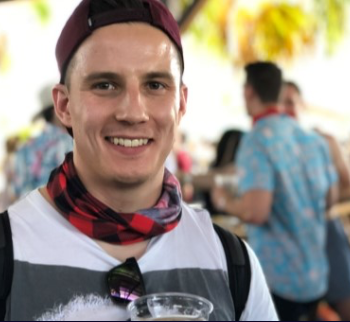 Seany P is the more muscular, and some might say shorter, half of the Sham-Wow pair. Standing a full 5ft 7inches tall, what he lacks in height he makes up for in spunk and his ability to bench press Donovan. Although technically another Alberta boy, having grown up in the frozen tundra of Edmonton, he left the prairies to complete medical school in the frozen metropolis of Ottawa. One day, while putting on his third pair of long johns to go outside, he decided that there had to be more to life than frostbite and packed up his snowboard and hockey skates to come and live the Island life.

However, Edmonton wasn’t all bad for Sean. While doing a degree in Biochemistry and Business at Concordia University he met his incredible wife Morgan, who is both better looking and cooler than him (in Sean’s own words). To his credit, or perhaps his wife’s, he holds the title of best dressed in the program, owning more Lululemon than the rest of us combined!

Although Sean is the perhaps the quieter counterpart to his gregarious co-resident, there is a sure-fire way to bring out his charming personality. Merely inquire about his greatest passion. Costco. Ask him where any of his furniture comes from and watch his eyes proudly light up as he tells you all about the week’s latest deals. If he’s not outdoors attempting to conquer the mountains on his mountain bike or snowboard, he can be found elbowing grannies and young children out of the way at the free sample kiosks on a Sunday afternoon. Oh ya, he loves working in the ED too; quickly becoming known for having a black cloud that keeps him busy in the trauma bay, getting early involvement in resuscitations and honing his procedural skills.